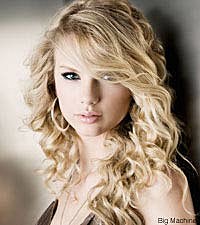 Although Taylor Swift started her career writing country songs on Nashville's Music Row, around the world she's crossed over into some pretty heavy metal! Her 'Fearless' CD, which has spent 11 weeks so far at the top of Billboard's all-genre Top 200 chart, has now been certified either gold or platinum in 14 countries across five continents. The teenager has sold more albums than any other recording artist in the world this year.

Taylor's march towards world domination began in the U.S., where 'Fearless' is already certified triple-platinum. Album certifications vary by country, so while her triple platinum certification in the U.S. means three million CDs sold (and counting!) the same certification in Canada represents 240,000 discs. 'Fearless' is now double platinum in Australia (140K), where Taylor toured earlier this year. It has reached platinum in Malaysa (20K), Ireland, Indonesia and New Zealand (15K apiece), as well as Taiwan (14K) and Singapore (12K). The United Kingdom has certified the album Gold x2 (200K), while Norway, South Africa, Hong Kong, and The Phillipines have issued gold records for sales ranging from 7,500 to 20,000 units.

If all those numbers boggle your brain, let us lend our fingers and toes. By our math, more than 620,000 copies of 'Fearless' are in CD players outside of the United States. Meanwhile, Taylor's self-titled debut CD has just been certified quadruple platinum here in the U.S. The jet-setting star is currently in London -- "Or as I like to call it, FUN-don," she tweeted from the plane -- for the second of three trips this year to the U.K.

Filed Under: Taylor Swift
Categories: Albums, Charts, Country News
Comments
Leave A Comment
Back To Top
Which of Luke Combs' Songs Are About His Wife, Nicole Hocking?