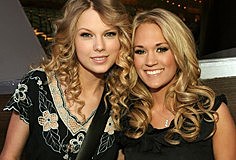 Rolling Stone magazine has released its list of the Top 16 "Queens of Pop," with country royalty Taylor Swift and Carrie Underwood genre-hopping for the prestigious list, landing at No. 2 and No. 11, respectively. The ladies were ranked with a point system based on digital and album downloads and sales, Hot 100 rankings, radio airplay, YouTube views, social media, concert ticket sales, industry awards and critic ratings. The list was compiled based on statistics between 2009 through mid-2011.

With almost 10 million albums sold and a staggering 42 industry awards won, Taylor beats out pop music heavyweights Rihanna, Britney Spears and Rihanna to claim the runner-up spot, trailing only Lady Gaga. The 'Mean' singer pulled in a staggering $73.9 million in touring sales, with her near sold-out Speak Now World Tour going strong throughout the rest of the year.

Carrie has a strong showing in album sales, coming in No. 3 behind Taylor and Lady Gaga with more than three million albums sold just since 2009. (Her total album sales top 13 million.) The 'Cowboy Casanova' singer placed No. 8 in the touring category, earning $37.8 million on the strength of her headlining Play On tour.