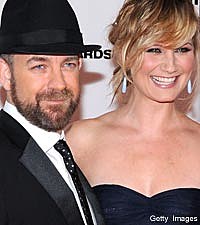 Sugarland have a tough act to follow ... themselves! With three multi-platinum albums under their belt, the superstar country duo is always trying to raise the bar on the music they make. And fans who have seen any recent Sugarland shows have gotten a little taste of what just may be on an upcoming project, namely two brand-new songs they've been performing live lately, 'So Long' and 'Take Me for a Ride'.

According to EW.com, Sugarland's Kristian Bush and Jennifer Nettles are planning to head back into the studio early next year to work on a new album with a "summerish" release date. Obviously not afraid to share what they have been working on with their fans, Kristian warns, "Some things just show up once in our land."

When asked about another new song, 'Blood on Snow,' Jennifer agrees it would be a great fit for the upcoming 'Twilight: Eclipse' movie soundtrack. "Call 'em up!" she said, "That'd be great!" Although the 'Twilight' movie soundtracks are known for their emo-sounding riffs, Kristian agreed with a possible soundtrack pitch. "Just say 'Twilight'!" he jokes.

In the meantime, Jennifer and Kristian are celebrating the release of their first holiday album, 'Gold and Green,' along with their win Wednesday night for CMA Duo of the Year.