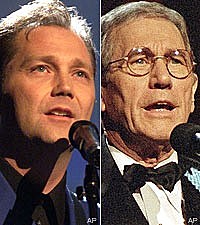 Steve Wariner is paying tribute to his mentor. The country musician is putting the finishing touches on a new album reportedly called 'My Tribute to Chet Atkins.'

Wariner was a budding singer and guitar picker when Atkins hired him to play in his band, back in the early '70s. Atkins also produced some of Wariner's own music, trying to help him land solo notoriety.

"He taught me not to be so self-indulgent with my music, especially when making a record," Wariner recalls in an interview with MisterGuitar.com. "I'd say, 'I really like this,' and he'd say, 'Well you're not the one buying the record. You need to make it for them, they're the ones buying it.'

"But most of all, I learned from Chet about being kind to people ... I saw him many times standing on the street and talking to people. He had no idea who they were, but he would take the time and listen. Not many icons do that -- hang out with the average guy on the street. So that always impressed me. They couldn't believe they were standing there talking to him, talking about their garden or whatever. But he really cared."

Country Standard Time reports that Wariner will include covers of some Atkins classics on the new album, along with some original songs inspired by the country legend. The CD is expected to be released in June.