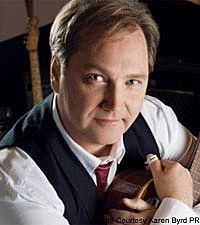 Legendary country musician Steve Wariner will make a special guest appearance Saturday (Nov. 21), on the popular radio show 'A Prairie Home Companion.' During his segment, Steve will play songs from his new album, 'Steve Wariner, c.g.p., My Tribute to Chet Atkins,' which was released earlier this month.

"It seems natural to go up there and do some of the music from this album," Steve says of the show, hosted by Garrison Keillor. "I'm grateful for the opportunity. I'll be playing some of the guitars Chet gave me."

'A Prairie Home Companion,' airs live from the State Theatre in Minneapolis, Minn. at 6:00 PM ET. Four million listeners on some 600 public radio stations in the U.S. and abroad tune into the show each week.