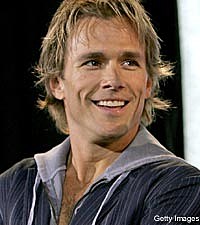 In recent years, Blue County members Scott Reeves and Aaron Benward have been pursuing solo careers to expand their creative wings. Aaron has teamed up with Brian McComas to unveil the Nashville Unplugged songwriters event in Las Vegas. And Scott has been focusing on his own music career, as well as working closely with an aspiring singer who also happens to be his 17-year-old daughter Emily.

But on Wednesday [Dec. 9], Scott returns to another of his passions -- acting -- when he makes his debut as Steve Lars Webber on the daytime soap 'General Hospital.' In 1986, Scott played the role of Jake Hogansen on 'Days of our Lives.' From 1991 to 2001, he played Ryan McNeil on 'The Young and the Restless,' earning two Outstanding Supporting Actor nominations at the Daytime Emmy Awards.

"After we pulled back from Blue County, I flew out to L.A. to reconnect," Scott tells The Boot. "I did a Hallmark Channel movie ['Final Approach' in 2007] and realized how much I missed acting. I had that hunger for it still. This part came up, and they wanted to meet with me. I knew immediately that this is what I wanted to do. They really customized the character to me. He's a lot like me."