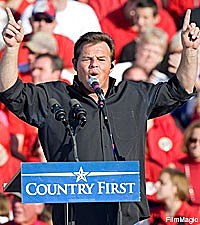 Sammy Kershaw, who lost a bid for the office of Louisiana lieutenant governor in 2007, has his eye on the position again. The singer, who officially announced his candidacy for the office today (May 3), in a statement detailing his campaign platform.

"This is the 'Real People Campaign,'" Sammy declared in a statement. "I am running for the average, hardworking citizens of this state, who are tired of career politicians and political insiders using this seat, and their taxpayer dollars, as a place to bide their time until they can run for some other position."

The primary responsibility of the Lt. Governor is to serve as Louisiana's Ambassador," Sammy continues. "This job is about introducing the unique people, culture and heritage of this state. I have been in the promotion business my entire career and no one is more qualified to do this job than I am. It's time the people have someone in this position who not only can do the job, but wants the job."

Sammy, 52, has promised to sign a pledge to the people of Louisiana promising not to run or campaign for another office during his entire term if he is elected this fall. He is also challenging every other candidate in the race to sign the same pledge. During the 2007 campaign, he received about one-third of the votes. He later cited starting his campaign too late and spending too much time on the road playing music as reasons for the loss.

In what he calls "A Real Plan for the Real People of Louisiana," his platform includes plans for a program called "Reintroduce Louisiana," designed to promote all of Louisiana, and establish Louisiana as the entertainment capital of the country and recruit new industry to the state. His platform also includes plans to introduce a new generation to the natural assets of Louisiana, foster creativity in adults and children through cultural programs, and reinvent a spirit of volunteerism and community spirit.

Running on the Republican ticket, Sammy declares he is "pro-life, pro-marriage and pro-gun and proud of it." He actively campaigned alongside President Bush and Vice President Cheney in 2000 and 2004 and with Senator John McCain and Governor Sarah Palin in 2008.

Born and raised in Kaplan, La., Sammy currently lives in Lafayette.The Louisiana primary is set for the first week in October.