Sammy Kershaw is celebrating his 40th year in the country music industry. Although he has been keeping a low profile in recent years, the singer of such classic hits as 'Queen of My Double Wide Trailer' and 'She Don't Know She's Beautiful' is back in a big way. Not only has Sammy released his tenth studio album, 'Better Than I Used to Be' (in stores August 31), but he is also running once again for Lieutenant Governor in his home state of Louisiana. He also has his chef hat on, fine tuning his own line of Cajun spices. The Boot recently sat down with Sammy to catch up on his life and eclectic career.

On making his country music comeback: "Sometimes you've got to stop sitting around feeling sorry for yourself. You've got to get out there and do something and try to make it happen ... shake a few trees. So I decided to go ahead and start my own record label. If I was going to gamble money, I just assume make it where I couldn't lose my masters to somebody else. So here I am, working hard. I'd like to do a little more of it with the label, and eventually have two or three artists signed to it."

On his new album: "To me, this album is like the second album I ever cut, 'Haunted Heart.' It's my favorite album. This one is really close to it. If I had to chose, I'd probably have to flip a coin on which one I like the most." 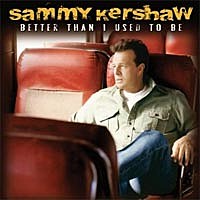 On songwriting: "I did a little bit of songwriting working up to this new album, but I'm not a big songwriter. I depend on songwriters for my songs. There are songwriters out there that can write stories that I've lived before. I won't cut a song unless I've lived it ... of course there aren't many things I haven't lived! I've been in this business for so long. I'm 52 years old, but I've lived a life of a 100-year-old man. There are not that many things that I haven't done -- good and bad."

On his recent cameo in the movie 'Suicide Notes': "A friend of mine was in 'The Sopranos,' and he called me up saying he was doing an independent movie in Houston. He said he might have a small part for me. So a couple of hours later, the director was on the phone with me, and they gave me this little part. Then they asked me to write a song for the movie.That was the coolest part, but I was worried about writing the song. How do you write a song about suicide? Then I read the script, and I figured out that it's a dark comedy. So I went about it in a comedic way. It's just about a guy who wants to kill himself, but just can't get it right. He couldn't get hit by a train if his feet were tied on the track! They loved it, so it worked out well."

On his new line of Cajun spices, rubs and hot sauce: "I've been wanting to do Cajun spices for years. I just never got around to getting really serious about it until now. I had tried and tried, and I had used the spice that I'd mix up. The next time I would use it, it might not taste the same. I don't know why, but it just wasn't that good to me the next day. That just went on and on for years. Finally, I hit on one, and I used it every day for eight months. Every time I used it, it was the same. I thought, well now it's time to put it in the cans! So I've got the Cajun Spice and one with a little more pepper in it to make it a little bit hotter. Then I've got the Cajun Hot Sauce and also a steak rub."

On running for Lieutenant Governor of Louisiana again: "This is the biggest thing I want to do right now. There's no doubt in my mind. The time is right. The stars are lined up. Everything happens for a reason. I have a lot of good things going on. The only thing I worry about is if they all come together at one time because I may not be able to handle it."

On the top three highlights of his career: "Being inducted into the Louisiana Music Hall of Fame, doing the Grand Ole Opry for the first time, and going into the studio with George Jones singing on the same microphone together. Those are the three things I will never forget in this business. Jones and I have been friends for a long time. I met him when I was 14 years old. That was a long time ago!"