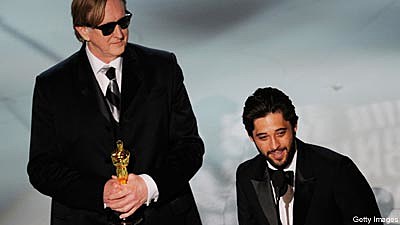 Ryan Bingham and T-Bone Burnett have their first Oscars. At the 82nd Academy Awards in Los Angeles Sunday night, the alt-country singer and famed producer won Best Original Song for 'The Weary Kind,' which is featured on the 'Crazy Heart' movie soundtrack.

"Thank you so much," said a beaming Ryan upon accepting the coveted trophy. "I'd like to thank my wife Anna, I love you more than rainbows. My uncle Clay, my band, Jack Whigham, Scott Cooper, the cast of 'Crazy Heart' -- Jeff [Bridges], Maggie [Gyllenhaal], Colin [Farrell] and Mr. Bob [Robert Duvall]. Everyone at Fox Searchlight and Mr. T Bone Burnett and Stephen Bruton. Thank you all so much."

'The Weary Kind' was nominated alongside two Randy Newman songs -- 'Almost There' and 'Down in New Orleans,' from 'The Princess and the Frog,' 'Loin de Paname' from 'Paris 36,' and 'Take It All' from 'Nine.' Ryan and T-Bone's tune was also the winner for Best Original Song at the Golden Globes. Both Collin Farrell and Ryan perform renditions of 'The Weary Kind' in 'Crazy Heart,' which stars fellow Oscar-winner Jeff Bridges as a washed up country singer.

T-Bone and Ryan will continue their magical partnership, as the two are now working together on a new album for Ryan Bingham and the Dead Horses.