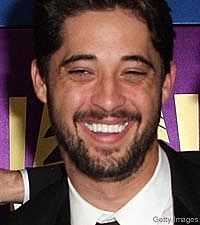 Ryan Bingham certainly won't forget attending the Golden Globes and winning the award for Best Original Song ('The Weary Kind' from the film 'Crazy Heart'). And that was some acceptance speech he gave, wasn't it?

Oops! No, turns out the song's co-writer and producer T Bone Burnett actually delivered the thank-you's as Ryan was nowhere to be found. And although it sounds like something straight out of the film, Ryan was, indeed, getting a drink at the bar when his name was called!

"I just got up for a second, and a friend of mine was there," Ryan admitted to the press backstage. "Yeah, I blew it. I'm sorry."

The singer's absence thrust T Bone into the solo spotlight, a moment for which he was clearly unprepared."It was pathetic," T Bone told reporters with a laugh. "He had the speech all written."

'The Weary Kind' is likely to nab an Academy Award nomination. and if it does land among the nominees, it's likely T Bone will keep close watch on his pal Ryan that night.