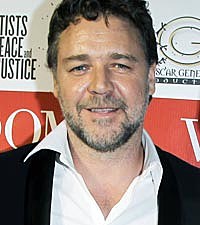 Director Phillip Noyce succeeded in making Angelina Jolie a secret agent in 'Salt.' His next top-secret mission might be even more challenging -- transforming Russell Crowe into a down-on-his-luck country singer.

Noyce tells The Boot that his next project will be a film adaptation of the novel 'Dirt Music,' with Crowe in the lead for the story of a grieving country singer who has lost the ability to write or play music.

Crowe famously led his rock band, 30 Odd Foot of Grunts, for years but Noyce says we are going to see a very different side of him in the film. "I'm very impressed," says Noyce. "I think he's really going to surprise people."

The concept of a country singer working through hard times to find his voice again did pretty well for Jeff Bridges in 'Crazy Heart' last year. And coming up later this year, Gwyneth Paltrow plays a country singer trying to revive her career in 'Country Strong.' But Crowe will even take it a step further by writing his own material.

"We'll see a lot of the songs that he has written himself," Noyce promises of the movie's soundtrack, adding that the songs vary from country to folk.

The movie, based on a Booker prize winning novel by Tim Winton, was reportedly originally supposed to star the now-deceased Heath Ledger. But Ledger chose to undertake the 'The Dark Night' instead. The rejuvenated project, with Crowe as the leading man, has just started to move ahead now that Noyce is done with 'Salt.'

The movie will be shot where it is set, the harsh climate of Western Australia. More than just about music, Noyce promises a love story. "It's about the love affair that rejuvenates the character's spirit," he says.

A release date for 'Dirt Music' has yet to be determined.