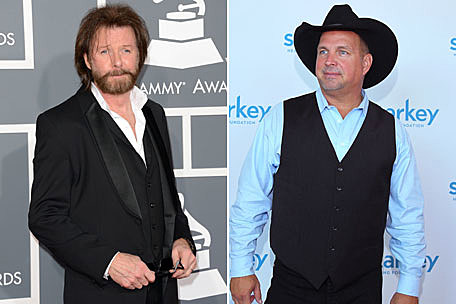 Details are still scarce, but Ronnie Dunn has confirmed that plans are in the works for a "second wave" of tornado relief for families affected by the deadly May 20 tornado in Moore, Okla.

He revealed that Garth Brooks and Toby Keith are on board for a relief concert, although representatives for both men have yet to confirm this information.
Followers of Dunn's Facebook page are aware that he has been working on organizing the benefit in recent weeks. "We were up all night firing texts and emails," he wrote on May 24. "Toby and I climbed over Garth's fence. He's in ... just trying to figure out how to make it all happen for the best !!!! .... but, 'he still has to clear things with Trisha'."

Several other reports on the page indicated Dunn was nailing down some details, but he didn't officially talk about the concert until an interview with Tulsa World, published on Thursday (May 30). He says the exact date and place could be announced within the next 24 hours, but somewhere near July 4 in Norman, Okla. is likely.

"There are a lot of moving parts to work out," he reveals. "But this is what we're aiming for."

Dunn was in Oklahoma when the tornado hit. He was on his bus at the time, and they were all headed toward Moore. "I started getting a bunch of emails and texts saying that I needed to watch the weather," he said. "We high-tailed it out of there to safety just as the tornado hit Moore."

This concert would be a second push of support following Blake Shelton's 'Healing in the Heartland' benefit. As Dunn points out, the need for help will be there for months to come. While Keith didn't confirm Dunn's accounts, he'd previously said he would like to hold a benefit concert some place huge, like a University of Oklahoma sports venue in Norman.