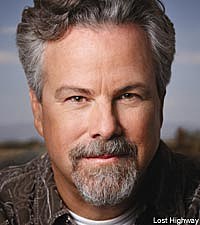 King of Americana, King of Texas Country, King of the Frat Boys ... Call him what you will, but the unassuming Robert Earl Keen prefers to coin his kind of music after a hotel chain. "Best Western -- that's my own category for myself," the touring troubadour tells The Boot with a laugh.

The latest project from Keen is appropriately titled 'The Rose Hotel,' an album that showcases this "Best Western" songwriter's notorious knack for putting tongue-in-cheek tales to music. With famed producer Lloyd Maines at the helm, the album introduces us to several new voices -- not just the characters in Keen's songs, but also voices accompanying his own, as Billy Bob Thornton guests on a humorous barroom saga, and Greg Brown lends his vocals to a version of one of his own songs. In short, it's the kind of music Keen's sea of loyal fans have come to expect from him -- crafty, raw, toe-tapping tunes that each paint a vibrant picture.

The release of Keen's new album, his first in four years, comes on the heels of the 20th anniversary of the song that arguably made him a music legend (not to mention the author of engravings on numerous tombstones), 'The Road Goes on Forever.' We talked to the master storyteller about the inspiration behind his music -- new and old.

You've called yourself a "world class hanger-outer" -- but that proves lucrative for you, because you've also admitted that a lot of your songs come from just sitting around.

Work is overrated. There's something about just having a Coke and breathing the air. I've become more of a fan of that. I'm not borrowing from Willie Nelson, I promise -- I happened to read the Tao on my own, and it says, "When nothing is done, nothing is left undone." So standing in one spot and letting things be is as good as it gets sometimes.

And that's what you sing about in the new song, 'Something That I Do.'

The whole idea of that song isn't that we should just sit around on our asses and watch television. I'm just saying we should take a moment to smell the roses ... I love that song. It's out of character for me, because it's a happy, upbeat tune! [laughs] In a lot of my songs, there's a lot of dead bodies floating around. But this one makes people feel good.

But there are indeed some dead bodies floating around on this album!

Yep. My dad dies in 'On and On,' and I bury my parents in 'Goodbye Cleveland.' And then I wish I was dead in 'Wireless in Heaven.' But that's light for me! There's one record where the body count is as high as 30. [laughs]

What's the story behind 'Wireless in Heaven'?

It's that feeling that you get when you're overwhelmed, and you're surrounded by people and don't know what's going on. There's a point where I have just wished I could disappear. Just like a computer, I crashed. That happens so much to me, like in Starbucks, so here's a nod to modern-day life that I can barely function in!

How did you pair up with Billy Bob Thornton on '10,000 Chinese Walk Into a Bar'?

I didn't know Billy Bob, but he gave his number to my road manager and said I should call him. Well, I don't call famous people! I'll occasionally get the number of some famous person, but I usually don't call because I don't know what to say. I just feel embarrassed about it. But when making this record, I just thought, 'What the heck?' So I gave him a call, and we talked for a long time. I told him about the song, and this particular verse that I'd like him to sing, about an old folk singer in Austin who got murdered. It has a colorful and rich history.

The duet with Greg Brown on your cover of his song, 'Laughing River,' was another spontaneous collaboration.

Greg hadn't played in Texas in 15 years, and I was recording that song and someone said to me, 'Do you know Greg is going to be here tomorrow night?' I said, 'No kidding?!' So I called him and asked him if he'd come sing on it. A lot of times if you're open minded, great things happen. 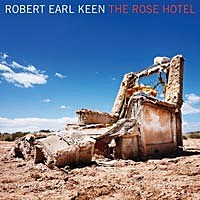 Tell us the story behind the CD cover -- the rat on top of the ratty chair.

The guy who did that picture is Peter Figen, who has done stuff for me on and off for about 15 years. My oblique idea was that I wanted a white rat on a pool table. So he took a few of those shots and said, 'Try these out as well.' And I just loved the photo. Plus, I'm just so tired of looking at my own face. I wanted a cool image ... and that rat running across a chair speaks to me. I don't know what it says [laughs], but it speaks to me!

In these days of song-by-song downloading, are you still able to look at an album like a movie -- like one comprehensive body of work?

That's the only way I look at it. I'm just trained to do it that way. I grew up in the dawn of the compilation of songs and was always a fan of the good records, not just the great songs. I love records. I don't know how to exist in a singles market. So the irony here is we're standing right back in 1958, and we don't even realize it. It's 45s and singles, and no one knows what's going on with the B-sides.

People call you the "King of Americana," but are you really one to care about labels?

If there were a real concrete definition to that, I might. But I've never seen one. My story is ... I'm on the road so much, what they're listening to is Best Western music! [laughs] That's my own category for myself.

Some of your Texas comrades have pretty strong opinions on whether or not there's a difference between "country" and "Texas country." Where do you fall in that spectrum?

Gosh, I don't know! I'm sorry! [laughs] I don't make it into a political issue. If it's a good song, it's a good song. In general, Texas country and country music are pretty much the same. If you dissect some of the lyrics, I know there's some messages that people have on both sides of the fence ... But ask somebody who speaks Russian what the difference is! I don't think they can tell ya. I think of myself as a touring vehicle, not unlike B.B. King, Willie Nelson, Bob Dylan, Dave Matthews -- people who tour all the time and play music all the time. We're not just putting out records and then touring behind a record, we're touring all the time. We tour and then put out a record every now and then. What's the most exciting part of my career is that live show.

A common misconception about you is that your live shows are just filled with frat boys. In actuality, you pack in people of all ages and backgrounds. How do you stay relevant to both your new fans and those who've been with you for decades?

I just put on a good show. My focus is on the people who plop down their $20 to see me. I want them to get their money's worth. I try to be entertaining, engaging. I try to get out there and make people forget their problems for a little while. And good entertainment appeals to any age. 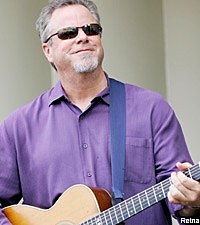 So many younger artists model their own performing styles after yours. What advice do you have for them?

There's no substitute for knowing your material backwards and forwards. I learned that the hard way. I walked out on many a stage halfway knowing what I was going to do. But now I've played so much, and it's made so much difference. And you can do that in the comfort of your own living room -- play and play and play. When you do that, you know your stuff and it translates to the audience.

Plus, when you know your stuff backwards and forwards, you're not going to get frazzled if someone streaks the stage while you're singing!

[laughs] You heard about that?

Yes, we saw the video on your website, where Reckless Kelly's Jay Nazz is bragging about streaking during 'The Road Goes On Forever,' but then you trick him into thinking they're kicked off the tour because of it. Do you prank all of your opening acts?

That was like a 20-person conspiracy! It got out of hand in a hurry. I've known everybody in Reckless Kelly for years and years, and they have a huge reputation for practical jokes. There are no rules when you're dealing with those guys.

Who's a new act who's impressed you lately and might end up opening for you, and subsequently trading pranks with you?

I love the Greencards. I'm a big fan of that kind of playing. I love Hayes Carll, too. I just like people who can get up there, play and entertain.

If you were in a Bernie Taupin/Elton John-type partnership -- you're the Bernie, the writer -- who's your singer?

Vince Gill. He just has an awesome voice.

Have you ever had to apologize for a lyric you've written?

Yeah, with 'That Buckin' Song.' This guy wrote me a letter that said he'd been a fan for a long time, and he put in the record when his 7-year-old son was there. He couldn't believe that I'd put that on there. And I know it's a lame, immature joke, but it was fun at the time! We were just messing around, getting Lyle [Lovett] to come sing on it. But all of a sudden, this guy was freaking out with his kid. So I wrote him a letter saying that I was sorry and thanking him for reminding me that I have a responsibility. That doesn't mean I won't keep getting off-beat about stuff, but I've said my share of apologies. [laughs]

You're about to celebrate the 20th anniversary of your monster hit,'The Road Goes on Forever.' Did you have any idea how special that song was when you wrote it?

Well, I knew it was good. I was just having fun with it, though. It was written in two parts. I wrote four or five verses in Texas, but I didn't feel like I was going in the right direction. So I put it down, and I went to make the album, 'West Textures,' which is what it ended up on. But my producer said, 'I don't think you have a real anchor song here.' And I said, 'But I spent my last penny to get up here to Nashville! You can't say that! Give me through the weekend.' So I went to a friend's back yard and dusted off the song. I put it together and didn't really think it was a career song, but it saved that project.

Have you ever been asked to write a movie script based on the lyrics?

Yeah, several times. I never really did it, but I have stacks of scripts on my desk. A lot of these people are just re-writing the song, but there's one woman who sent me a copy of a script that was awesome, really creative. They just used the song as an outline and made a great script out of it. So I have seen something that's fantastic, but whether anyone makes a movie out of it, I don't know.

In your book, 'The Road Goes on Forever and the Music Never Ends,' you include a photo of an old to-do list you wrote, and No. 13 says "Write a screenplay." What's No. 1 on your current to-do list?