Ricky Skaggs invited a few special guests to Ocean Way studio in Nashville Tuesday night to introduce his new album, 'Mosaic.' The project is a departure from the singer's most recent bluegrass leanings, as it tends towards spiritual and gospel tunes.

Ricky co-produced the disc with Gordon Kennedy, who was at the party to help introduce the songs. "The bluegrass community has probably put out a contract on me," Gordon joked at one point in the evening, referring to the different direction of this album. He paused a moment, then continued, "But in this economy, any contract is a good contract!"

Most of the evening was on a more serious note, as the two men talked about the inspirations and stories that brought the album to a finished product.

"It was one of those things where I felt the Lord was orchestrating a change in my life, musically," Ricky told The Boot, referring to his decision to release an album of gospel/spiritual tunes at this point in his career. "I don't know what the Lord will do with it, and I'm not worried about making a career out of it, I just felt now was the time to do this music."

The music has a decided pop feel to it, due as much to Gordon's co-production skills, which is why Ricky brought him on board. "I had written these songs a few years ago for another project," Gordon explains, "and when I heard Ricky was looking for songs I decided to send them to him. I sent a CD full of songs, not really thinking he'd be interested in the first three, since I wasn't sure of the direction for the album. Six months went by and I got word that he was going to cut the first three songs on the CD, and that Ricky was going to call me. At that point, I was as confused as anyone as to the kind of album he was going to record.

"Ricky called me and said, 'Son I love those three songs,'" Gordon continues, "and my response was, 'How are you going to cut them bluegrass?' His response was, 'We're not doing a bluegrass album, and I want you to come in and co-produce because you have that Beatles feel to your stuff." 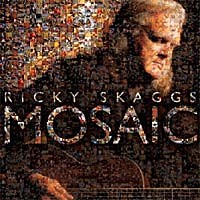 Both men said that they felt a real connection to the music they were recording, and often times little things happened that gave them confidence that they were doing exactly what they were supposed to be."Every single day something would happen that let us see that we were in the right place," Gordon said.

"We got to see people come in and listen to a few of the tunes, and every time they had an emotional reaction. Buck White of The Whites, who is Ricky's father-in-law, came by one day and we played him 'Instead.' When he started listening to it he started backing up, and I don't if it was a conscious thing or not. When he got to the wall, he just stood there with his face lifted toward the sky and tears streaming down his cheeks. Things like that confirmed that we were doing the right thing with this album."

The album includes 13 tracks and the bonus track 'Spontaneous Combustion,' which is a worship song that came about after Ricky's son and daughter were telling him about the music they played at church. The song makes use of various world instruments as well as what Ricky called a few sounds from Kentucky.

Gordon was a part of all the tunes on the album, co-writing with some of Christian music's best songwriters, including Phil Madeira, Mark Gersmehl and Ben Cooper. Also contributing a song with Gordon were two of his frequent co-writers, Langon Reid and Wil Reid.

'Mosaic' was released August 24. Ricky says he plans to do some tours in churches in order to promote the CD, but he also plans to perform the songs during his regular shows. After a short break, Ricky resumes touring in Palmer, Alaska on September 1 and Pagosa Springs, Colorado on September 2.