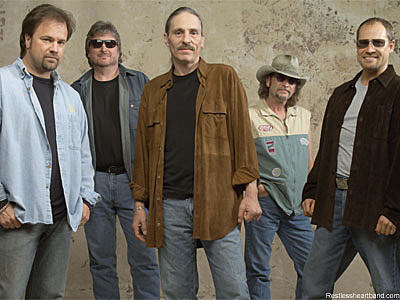 John Dittrich never thought he'd see the day when all five original members of Restless Heart would reunite. The drummer/vocalist in the band had weathered the whittling down of the group that had had such No. 1 hits as 'That Rock Won't Roll,' 'I'll Still Be Loving You,' 'Why Does It Have To Be (Wrong Or Right),' 'Wheels,' and 'Bluest Eyes In Texas,' and even the departure of frontman Larry Stewart in 1991 which made the band more determined.

"It was scary," Dittrich admits to The Boot. "Originally, we were going to replace him, but we had a tour booked in and our agent told us he was having trouble with a promoter there who wanted to know if there were going to be five warm bodies up there. We went, 'Wait a minute, 'We're not chopped liver here.' That made us so mad we went, 'Screw him and the rest of the world.' Now we had something to prove.'"

And they did. When guitarist Dave Innis left the band, Nashville WSIX D.J. Gerry House dubbed them 'The Incredible Shrinking Band,' still they topped charts with 'Tell Me What You Dream' and 'When She Cries.' In 1996, with seven albums behind them, though, the band finally called it quits, after some bad advice had rendered them label-less.

When four of them (including Stewart, minus Innis) came back together in 1998 and toured with Vince Gill, Dittrich still didn't believe there could be a reunion. Until 2001. Dittrich was enjoying work as a mental health technician at a psychiatric lockdown facility in Florida, keyboardist Paul Gregg was working with his brothers in their string of owned car washes, guitarist Greg Jennings was doing some studio work, keyboardist Dave Innis was music director of his church in Colorado and Larry Stewart was on the road as a solo act when agent Rick Shipp called a meeting and said, "'You guys can go back on the road and do what you were put on earth to do, but it needs to be the original five guys,'" recalls Dittrich. "Let's just say some hatchets had to be buried, but we sat down and we all wanted this to work."

Stewart says it's now working better than ever.

"It's easier than ever before," he explains. "We've been through so much, from the ever shrinking band, to finally setting it down in the mid '90s to four of us getting back together in '98 and then shutting it down again to putting it all back together again and realizing how lucky we were."

Currently tearing it up on the road, celebrating their 25th anniversary with a live album called '25 and Live,' (available on the band's website www.restlessheartband.com), Stewart adds, "I'm really proud of this band. I feel like we're singing and playing together better than we ever have."