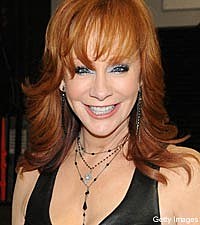 Reba McEntire is about to undertake an Epic adventure that will most likely involve a big bottle of champagne. The superstar has been chosen to christen the Norwegian Cruise Line's biggest ship ever, a 4,200-passenger vessel appropriately named the Norwegian Epic.

USA Today reports that Reba will be in New York City on July 2 to preside over the naming ceremony for the Epic. The ship will also serve as the host venue for the 34th Annual Macy's Fourth of July Fireworks. Reba had recently returned from a Mediterranean cruise on the Norwegian Gem, which was just one of the reasons she was chosen for the honor.

"I discovered that they are frequent customers on our ships, which is why I believe that Reba is the perfect choice to christen our largest and most innovative ship, Norwegian Epic," Norwegian CEO Kevin Sheehan said in a statement. "We are more than thrilled that such a celebrated performer as Reba, who also has experienced our product firsthand, will serve as Norwegian Epic's Godmother."

In addition to hosting big-name entertainers such as Blue Man Group, the Norwegian Epic will be home to a combination circus-and-dinner show called Cirque Dreams.