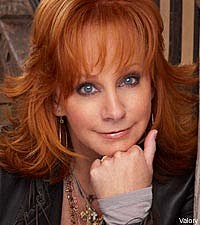 Reba McEntire has lived the lyrics of her new single, 'I Keep on Loving You,' and she bets most of her fans have, too. Written by Ronnie Dunn and Terry McBride, the tune talks about going through rough times but not giving up on each other. It's the polar opposite of her most recent hit, 'Consider Me Gone,' which basically says if you can't be honest with me, I'm out of here!

"Ronnie and his wife, Janine, have been married some time, and Narvel [Blackstock, the singer's husband and manager] and I have been married a while, so the song hit me hard," Reba tells The Boot. "We have been through rough times and tough times and arguments, but we made up over and over again. We argue about the business, the kids, where we're going on vacation. Now isn't that a tough argument to have?"

By and large, country songs come from the heart and touch the heart. For Reba, this one does both. "When I heard that song, what hit me was, 'This is the most relatable song I've heard in a long time.' I don't care if you're dating, just married or married 50 years, this song will hit home. I don't know of a person in a relationship who hasn't experienced one of the lines in that song." 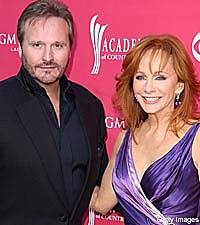 Reba and Narvel were married 20 years ago, after their business relationship turned romantic. Narvel was her steel guitar player and tour manager when the two fell in love. Reba says they're just as in love today ... thanks to knowing the secret to a happy marriage: "Stay away from each other a lot!" she jokes with The Boot, adding, "No, I'm just kidding ... I highly respect him, love him and [we have] great communication. I was not a good a communicator when we first got married. I would sull up and wouldn't talk to him. And he would say, 'Alright, what's the deal?' [mocks crying] I said, 'You didn't remember three years ago ...' He said, 'That's it? That's the problem?' And when you say stuff, you go, 'That was really silly; that wasn't that big a deal.' So what I've learned is when you're mad, get it off your chest. Say it then, because once you say it, it's not that big a deal."

The superstar, who has spent a fair amount of time in front of the camera, is getting ready to shoot a music video for 'I Keep on Loving You.' While she's very creative when it comes to her stage performance, Reba says she lets the professionals handle the ideas for her videos."What happens when I get ready to do a video, directors will send me their concept of what the video should be. We get 10 or 15 different treatments and Narvel and I read them and pick our favorites."

From that point forward, it sometimes comes down to who can be at the right place at the right time. "We look at the location for the video, and when everyone can be there to do it. We keep on narrowing it down until we've made a decision on the treatment and who the director will be. So I'm more of the person who does it, instead of the professional who writes the script."

Reba's first video goes all the way back to 1986 with 'Whoever's in New England.' She said at that time she had no idea of the power of video until she actually did one. She continues to believe in their significance. "I think videos are important because they enhance a song. When I hear a song, I have my own video in mind, but I always like to see how someone else portrays that song."

The singer is releasing a video of another kind on Feb. 9, with 'CMT Invitation Only: Reba.' Among the tunes on the 10-song collection are 'Strange,' 'Consider Me Gone,' 'The Night the Lights Went out In Georgia' and 'Why Not Tonight.'