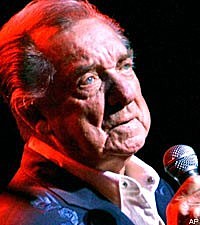 Ray Price has stopped cancer in its tracks. The country legend is resting at his home in Texas, recuperating from surgery to remove polyps from his colon. Price had the surgery last week, after a colonoscopy revealed numerous polyps in the pre-cancerous stage. The surgery was said to be successful, and the 83-year-old entertainer expects to resume his touring schedule in a few weeks.

The iconic singer of songs like 'Crazy Arms,' 'Heartaches By the Number' and 'City Lights,' Price made a name for himself in Nashville in the early '50s when he took over Hank Williams' band, the Drifting Cowboys, after Williams' death. He then formed his own band, the Cherokee Cowboys, with friends Willie Nelson, Roger Miller, Johnny Paycheck, Johnny Bush and Darrell McCall.

In the late '60s and early '70s, Price was both lauded and criticized or making pop-friendly country music, crossing over to the pop charts with songs like 'Danny Boy' and 'For the Good Times.' He also dabbled in Gospel music but never abandoned his musical roots, continuing to record country hits through the '70s and '80s. His last album was a joint project with buddies Willie Nelson and Merle Haggard, 'Last of the Breed,' which was released in 2007.