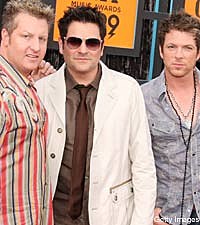 You'll soon be able to step on Rascal Flatts if you're strolling down the Hollywood Walk of Fame.

The country superstars, along with Oprah Winfrey, Penelope Cruz, will.i.am, Gwyneth Paltrow, Tina Fey, Danny DeVito, Reese Witherspoon, Donald Sutherland, Melissa Etheridge, Los Tigres Del Norte and The Muppets are among the latest celebrities to be immortalized with pink and black stars, as recently announced by the Hollywood Chamber of Commerce. The dedication ceremonies will happen sometime next year.

Rascal Flatts are currently in the midst of their Unstoppable tour, with special guest Chris Young.