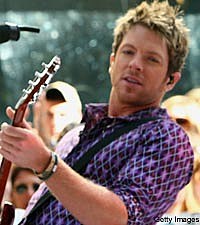 Live concerts can be risky business. Just ask Joe Don Rooney of Rascal Flatts, who found out firsthand just how risky on Sunday night when he was pulled off stage by an overeager fan!

While performing at the historic Konocti Harbor Resort and Spa in northern California, Joe Don was high-fiving fans from the stage when a female admirer pulled him right into the audience. Another concertgoer was quoted as saying, "He suddenly just disappeared!"

Luckily for Joe Don and the audience, he reappeared -- uninjured -- and was helped back on stage by security. The group went on with the show, and many joked that Joe Don had managed to stay in the "safe zone" while still giving fans the crowd interaction they came to see.

Rascal Flatts are currently finishing up the first leg of their American Living Unstoppable Tour. They're headed to Canada this week.