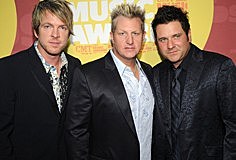 "For any artist, your career starts and ends with a great song. Period. Bar none. Nothing else on the planet matters in your career if you don't have good songs," Rascal Flatts lead singer Gary LeVox tells the Vancouver Sun. "Nobody works if the song isn't great and touches people's hearts. It's about the music first. That's what we work so hard at, finding great songs.

'I Won't Let Go,' the band's most recent chart success, touched the singer in a profound way. "It was spiritual for me, it was what God was saying to me: 'You may fall but I won't let go,'" Gary says. "That's the power of a great song, a universal lyric that means so many different things to so many different people."

With 11 No. 1 singles spanning a decade-long career, the talented trio know better than anyone that a singer is only as good as the songs they choose to record. The group has amassed worldwide album sales exceeding 20 million since their debut in 2000, but Gary is the first to admit he is still surprised by Rascal Flatts' overwhelming success.

"You can't even dream that big," he says. "I far exceeded my dreams as a kid so long ago. Country radio, our fans, it's really been a fairy tale. We're having more fun today than ever. We've got at least another 10 years left. We're ready to go, we're rockin'. They're going to have to wheel us off of the stage."