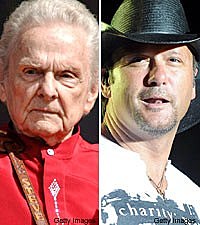 Bluegrass great Ralph Stanley's mournful performance of 'O Death' earned him a Grammy in 2002 for best male country performance, but the honor was apparently accompanied by a case of sour grapes. CMT reports that in his upcoming autobiography, 'Man of Constant Sorrow: The Life and Times of a Music Legend,' Ralph alleges that his fellow nominee Tim McGraw, who was -- perhaps ironically -- nominated for 'Grown Men Don't Cry,' was disrespectful toward him following his win. He's also quoted as saying of Tim, "He wouldn't know a real country song if it kicked him in the ass."

The 82-year-old's memoir details his seven decades in the music business, ranging from his work with brother Carter as the Stanley Brothers, to his involvement in the hugely successful film, 'O Brother, Where Art Thou?'

Among the more amusing revelations in the book is the fact that the late Keith Whitley, who was a member (along with Ricky Skaggs) in Ralph's band, the Clinch Mountain Boys, would style Ralph's hair before they hit the concert stage.

'Man of Constant Sorrow: The Life and Times of a Music Legend,' which is due in stores October 15, was written with Eddie Dean and published by Gotham Books.