It was a very happy birthday at the Grand Ole Opry Saturday night, as Dolly Parton, Taylor Swift, Trace Adkins, Del McCoury, Bill Anderson, Roy Clark, Sunny Sweeney and more helped ring in the legendary show's 85th year. More than 8,800 fans packed the newly-renovated Grand Ole Opry house, which reopened last month after a massive makeover to repair damage from flood waters that devastated the building back in May.

The Boot was backstage for the celebration, where stars and their families mingled and enjoyed a huge birthday cake shaped like dueling guitars. Trace Adkins' young daughters and Del McCoury's grandkids were among the scores of youngsters backstage, all excited to get a glimpse of Taylor Swift, who happily posed for pictures and signed autographs. Taylor herself was beaming with childlike excitement after meeting one of her own heroes.

"I just met Dolly Parton!" Taylor exclaimed backstage, skipping through the hallways with a huge smile on her face. 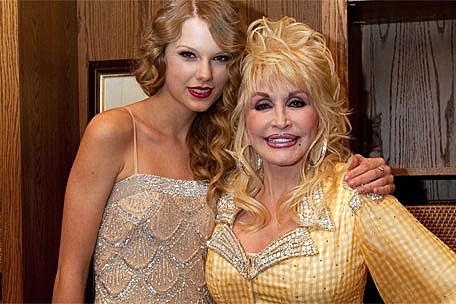 Upcoming performances at the Opry this month include the Charlie Daniels Band, George Jones, the Judds, the Oak Ridge Boys, Blake Shelton, Randy Travis and another appearance by Trace Adkins. Visit www.opry.com for tickets.