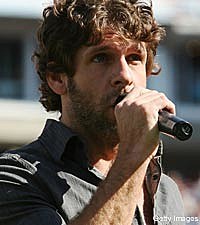 Billy Currington had just finished his set, with Kevin Costner and Modern West on deck, when strong winds caused the main stage to collapse at the Big Valley Jamboree in Camrose, Alberta, Canada on Saturday. One person was killed by falling debris, and at least 75 other fans were injured in the brutal storm.

"It felt like bombs were going off around us in this concrete and steel building," singer Jessie Farrell, who had performed earlier that day, told CTV News. "Huge hits of power hitting the building, and then the lights were off."

"We were all racing for the exit," said concertgoer Lori Trelenberg. "It was devastation. It was strong and powerful. The stage just sort of crumbled."

"I can't describe the sky -- it was brown and purple and green," said CFCW radio personality Danny Hooper, who was on stage when the storm hit. "The massive wind blew me backwards."

Officials contend they had very little warning that the storm was coming. They got word around 5:55 PM that a possible tornado had touched down about 60 miles away, but the warning was too late.

"We had people on the stage at 5:57 PM, and the storm struck between 5:57 PM and 6 PM," Camrose Police Chief Darrell Kambeitz reported.

The identity of the deceased is not known, but authorities confirm it was not one of the musicians performing. One of Currington's band members suffered a broken arm. Costner and his band were caught underneath the stage but managed to escape relatively unharmed.

"We wiggled our way out," Costner's manager, Nick Meinama told CTV News. "We found that our road manager and guitar player had been hurt, but the ambulance and the paramedics were here instantly to take them to the hospital."

The Big Valley Jamboree is Canada's biggest annual country music festival, with attendance of more than 15,000. All shows Sunday were canceled, due to Saturday's devastation.

See photos from the storm.