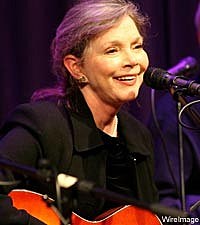 With 18 albums to her credit, folk icon Nanci Griffith is no doubt an illustrious songwriter. But the Grammy winner admits that in the last decade, her frustration with the political system had caused a creative dry spell, and she began to wonder if she would be able to write again. Glancing at the New York Times one morning, it was a chance reading in an unlikely place -- the obituaries -- that became the catalyst for her latest CD.

Nanci began reading the obituary of Mildred Loving, an African-American woman who was forced to leave her home state of Virginia because of her marriage to a Caucasian in 1958 (then forbidden under Jim Crow laws). Mildred lost her husband in a car accident and never remarried. The tragic love story was a pivotal moment for the singer, inspiring the song that became the title track of her latest album, 'The Loving Kind.'

"After a couple of hours of just sitting there and crying, and wondering why this case isn't championed in our country, I sat down and the song wrote itself," she tells SESAC magazine. Centering the rest of her album around 'The Loving Kind,' Nanci was inspired to pen what is the most honest -- and politically outspoken -- album of her career, based largely on listening to other people's stories.

"People opened up their hearts again for the first time in a long time and said, 'Yes, we can -- we can do this, we can turn all this animosity and fighting around and make something of ourselves again," she says. "It was a different voice, because I was back writing again, and writing very strong and being inspired by events all around me. I think it was very different in that the songs came very naturally."

Recently receiving the prestigious Lifetime Achievement Award from BBC Radio 2, Nanci says life could not be any better. "I think I've been blessed to have a kind of easygoing career," she adds. "The fans are out there, and they wait for new records to come along ... it's a lovely feeling."

Nanci will spend much of the summer crossing the U.S. in support of the new album. Click here for tour dates.