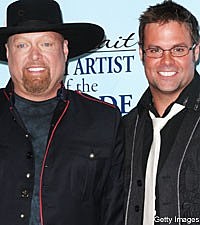 Eddie Montgomery of Montgomery Gentry says he had never been sick to his stomach with nerves until Tuesday. That's the day he and singing partner Troy Gentry became the newest members of the Grand Ole Opry.

"I couldn't sleep last night, and I've had butterflies all day," Eddie told The Boot. "It's an unbelievable honor. If we're dreaming, don't pinch us and wake us up!"

Eddie and Troy were inducted by Marty Stuart and Little Jimmy Dickens, who introduced the duo by saying, "I know these men on and off stage, and I find them to be gentlemen in every respect. I welcome them to our family of entertainers."

After singing 'Hillbilly Shoes' and several other songs spanning their ten-year career, Montgomery Gentry received a standing ovation from the Opry audience, as both men wiped away tears.

Eddie was especially emotional throughout the evening. His father was a musician and had often admonished him, "You haven't made it in country music if you haven't played the Opry." Had he been alive to be at the telecast, Eddie says he probably would have had words of wisdom for him. "Probably the first thing he'd say is, 'Now don't get out there and mess this up.' I think he'd be patting me on back and say, 'Go out there and get it. Now you've done something!'"

After their induction, Eddie raised his new member award in honor of his father, saying, "Dad, we made it!"