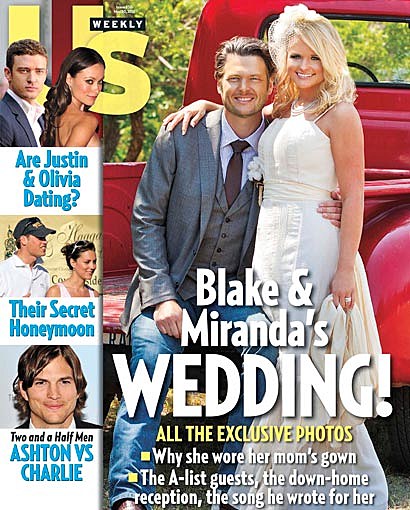 Photo Courtesy of Us Weekly

"My parents have been married for 33 years, so this dress is already a good-luck charm," the singer tells Us Weekly. The magazine reveals Miranda walked the aisle in a pair of custom-made Casadei cowboy boots.

The groom sported boots, as well, along with jeans and a sharp gray jacket and matching vest. "Miranda told me she wants me to be comfortable," Blake told The Boot before the wedding. "She said, 'I want you to wear your blue jeans and boots, and we'll find you a cool jacket,' which shocked the hell out of me!"

Blake reportedly choked back tears as Miranda's dad gave her away. "I couldn't get over how beautiful she was," he said.

Among the 550 guests at the ceremony were singers Reba McEntire, Kelly Clarkson, Martina McBride, Dierks Bentley, Josh Kelley, Lady Antebellum's Charles Kelley and the Bellamy Brothers. The couple's friend and musical hero Neal McCoy performed at the reception. "They wanted to pay me, and I told them, 'Of course you don't have to pay me, that'll be an honor to play it!'" Neal told Country Weekly magazine.

For the wedding reception, Miranda changed into a short, strapless silk shantung Priscilla of Boston dress. Guests were served venison "harvested by me!" Miranda tweeted just before the nuptials.

"It was the greatest wedding/reception I've ever been to!" guest Kelly Clarkson posted on her Facebook page. "I feel as though they should renew their vows every year and throw a party as well, because everything about it was awesome! Cutest couple ever!"

More wedding details, including the couple's star-packed guest list, their unique dinner menu, and their honeymoon plans are available in the new issue of Us Weekly, on newsstands now.

Mr. and Mrs. Shelton are now having a little "staycation," instead of going on an exotic honeymoon. They're spending some much-needed alone time together at their home in Tishomingo, Okla. The outdoorsy twosome are relaxing and doing what they'd normally do on time off from the road. "Honeymoon bliss!" Miranda tweeted on Tuesday, posting this picture (left) of her holding up a fish she caught that's almost as big as her!