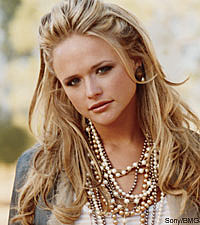 Miranda Lambert offered fans a sneak peek of her upcoming single, 'Dead Flowers,' with a lively performance during the ACM Awards show last week. On her website, Lambert reveals that she was inspired to write the song after throwing out a gift bouquet before going back out on tour.

"I had some flowers that I got for Valentines Day in a vase on the kitchen table," Lambert writes. "I was going on the road so I had to throw them in the yard. They were just laying there and it was a really sad image. The song came to me right away and was one of those ones that kinda wrote itself."

'Dead Flowers' will be on Lambert's new, as-yet-untitled album, which is due in September.

Lambert also writes about her regular Sunday trips to the Sonic drive-in restaurant, where she routinely orders her favorite drink -- a diet cherry limeade. At the Sonic in Tishomingo, Okla., Miranda picked up another of her favorite things -- a new puppy.

"I was about to drive away and out of nowhere comes this little dog," writes the animal-loving Lambert. "At first I wasn't even sure if it was a dog. I got out of the car and she came right to me. She was covered from head to toe in fleas and ticks. I mean hundreds. I started asking everyone if they knew where she came from and they said no but that she had been there for a week. A week!"

Lambert took the dog to boyfriend] Blake Shelton's home where the couple gave her a flea bath before taking her to the vet the next day.

With the awards show to think about, Lambert sent the six-pound one-year-old pup on a flight to Vegas with her mom. She's decided to name her Delta Dawn, although Shelton calls her PACO (though she doesn't explain why). Backstage at the ACM's Lambert introduced Delta Dawn to Carrie Underwood's dog, Ace. "Maybe soon they can a have a playdate," she says.

Delta Dawn was the second dog Lambert had found in just a two-day period. She gave the first one she discovered to two little girls who live near her home.

"I just don't know what is wrong with people," she writes. "Please, if you see animals on the side of the road don't just leave 'em. They might turn out to be the pet of your lifetime!!!"