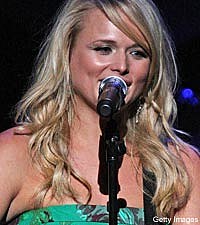 Miranda Lambert charged to the top of the country charts with her latest single, 'The House That Built Me,' her second to go all the way to No. 1.

The Texas native says she is really lucky to have been able to record it, after figuratively wrestling the song away from fiance Blake Shelton. "'The House That Built Me' is one of the most special songs in the history of songwriting," Miranda tells The Boot. "I just think it's timeless and beautiful, and every single person that I talk to says something about that song. And it's good to know that it does to other people what it did to me the first time I heard it, which is just absolutely take me back to when I was six. I really think that it's one of those songs that will live on forever ... it took me a long time to be able to sing it live without crying or tearing up."

Whenever her family hears the song, they also start to get a little emotional, which Miranda finds a bit unexpected. "The other night, my parents were in the audience -- my mom and dad and my grandma, they were all there," she says. "[My grandma's] up there headbanging. But 'House That Built Me' came up, and she's like me, she doesn't cry. She's kind of a tough woman, and she just had big tears in her eyes. So, of course, I couldn't even finish [the song]."

When making the video, Miranda wanted it to be authentic, so she asked her mother to dig out the old home movies, which was not as easy as it could have been. "Mom and Dad were private investigators, so, literally our home movies were mixed in with surveillance tapes and random people," notes the singer. "So, Mom had to dig through all that stuff and sort it out, and it sure was a lot of work on her. But I think it's a great reward because the video's awesome."

Miranda is currently spending a second week at No. 1 with 'The House That Built Me.'