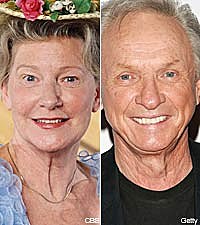 Country Hall of Fame member Mel Tillis has had success as a songwriter penning songs for the likes of Webb Pierce ('I'm Tired') and Kenny Rogers & the First Edition ('Ruby, Don't Take Your Love to Town'). As an artist, he had plenty of his own hits, including 'Heart Over Mind,' 'Neon Rose' and 'Sawmill' in the '70s. But despite his success, Mel admits confidence has been a challenge.

Mel, who developed a stutter during childhood, recalls the early days of his singing career on stage when he hesitated to talk to his audience. His four-month stint touring with the legendary Minnie Pearl in 1957 gave him the boost he needed.

"Minnie noticed I wasn't introducing my songs," Mel tells The Boot. "Man, I couldn't hardly talk at all. One day she called me aside. She said, 'Melvin, if you're going to be in this business, and you're going to be a singer, you've got to introduce your songs – and more importantly, at the end of it, you need to thank them.' And I said, 'Miss Minnie, I can't do that. They'll laugh at me.' She said, 'No, Melvin, they will not laugh at you. They'll laugh with you.' I took her advice – and boy I watched her like a hawk. I learned a whole lot about timing by watching her ... and with the timing, what the stutter would allow."

Fast forward 52 years, and you'll find Mel making speeches around the country when he has time off from his singing engagements. And he uses those lessons in humor that he got from Minnie.

"The more I'm on stage and the more I tell about my life and things that have happened to me along the way, (I discovered) humor is the best medicine in the world," confesses Mel. "Last year I was asked to come to the University of Florida and give a talk to their students that were going to be speech therapists. I started to turn it down, and I said, 'No, I better do this.' So I went, and I talked about an hour and a half, and I let them ask me questions, and it was a wonderful experience for me and a learning thing for the students.

"And now I've been asked to come to Florida State and do the same thing," he continues. "Not too long ago I was asked to come down to Dothan Ala. Every year they have a get-together of senior citizens. They wanted a speaker to come down, and they called me. I had never done that before other than the speech at Florida. They said, 'You only have to do 20 minutes.' I said, 'I can't say hello in 20 minutes.' [laughs] They said, 'You can take as long as you want, Mel.' I went down and did it, and it was one of the best things – I got the biggest rush out of it. It just made me feel good. I had those old people laughing. Hell, I'm 77! [laughs] I went on stage, and I said, 'I'm one of y'all!'"