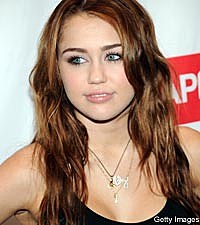 How did you truly get into Miley Cyrus' heart? That's easy enough. You have to be able to get along with her family, including dad Billy Ray Cyrus, says the 'Hannah Montana' star. Are you listening, new boyfriend Liam Hemsworth?

"My parents are a little loco," Miley confessed during a press conference for her latest film, 'The Last Song.' "So [it matters] if you love me and my family and my mom and dad and grandmother and my 10,000 dogs. If you love me after you meet my lifestyle, then you're a keeper."

Miley made the statement as her new love interest, who also happens to be her co-star in the upcoming film, blushed nearby. The two didn't address their newly revealed relationship specifically, but just talking about love while at the podium was "so awkward," the singer-actress admitted.

The Australian actor had the same thought process on knowing when a relationship is for real. "When you meet the parents or she meets your parents, then it gets more serious," he said.

Are you listening, Billy Ray?

On the music front, Miley, who recently released the single, 'Nothing to Lose,' with rocker Bret Michaels, told the crowd that after her new album comes out in the summer, she'll be taking an official break from the industry.

"This film was a test for me to decide what I really want to do -- and it's I love making movies," said the 17-year-old. "That's what I want to pursue. It's not just that I don't love music. I feel I need to get away from that for a little while."

'The Last Song' opens in theaters on March 31.

Get more on Miley Cyrus at PopEater

Filed Under: MileyCyrus
Categories: Country News
Comments
Leave A Comment
Back To Top