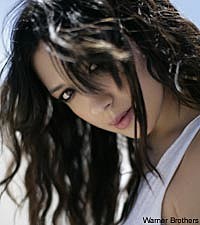 In music interviews, "It feels like a new beginning" or "I feel like a new artist" falls just below "This is our best work" in ubiquitous clichés. But for Michelle Branch, it's true. In the six years since her last solo record, the one-time teen pop sensation, who scored two Top 10 pop albums by her early 20s, moved from L.A. to Nashville, formed and had a partnership dissolve in the Wreckers, became a burgeoning country star, married her bass player, Teddy Landau, and had a daughter, Owen. So when Michelle sits down with The Boot in the Burbank offices of her label before playing a short set of songs from her new album, 'Everything Comes and Goes,' and says it feels like she's starting over as a solo artist, she's earned the right to the cliché.

Michelle speaks exclusively with The Boot about avoiding the paparazzi, how motherhood has changed her songwriting, and why, with so many rock artists coming to Nashville in recent years, she feels like a trendsetter.

How does it feel to be a solo artist again?

It's really strange, because in launching this record we've been doing a lot of online content video-editing stuff from day one until now, kind of a retrospective. It doesn't feel like it's been six years since my last record. But now after seeing everything that's gone on, it's like, "Yeah, it has been a while." I can't blame it on another person if for some reason it doesn't work. [laughs] But at the same time it's very liberating.

Even though this isn't your first solo record, does it feel like starting over because it's been so long?

It's funny, it seems like just the way a record is launched and released has changed so much. It's not the same machine I was used to when I was doing solo records. And then having gone to Nashville and doing the Wreckers was another totally different way to work. Having another person there to balance out all the duties, so to speak. I think my anxiety about having a new record is the fact that I feel like a different person.

How do you feel different?

This record is very personal, and that's why it's a little bit harder. When I listen to the first few records ... my voice is so high and it's so auto-tuned and processed. I feel like this record really captures who I've been trying to work to be as an artist. But as far as what has changed about my life, being a parent forces you to really reevaluate everything that you believe in as a person ... from what kind of food am I gonna serve, to where is she gonna go to school, what city do I wanna live in, what do I wanna teach her. It makes you realize what's really truly important.

As far as being a writer, I just don't have as much selfish writing time as I used to. I go home and I'm doing dishes and laundry and making sure she's OK before I give myself that time. For so long, especially the first record, I was writing about experiences I maybe didn't necessarily know entirely. And so if you go from me at 20 years old to me at 26, normally that would be a drastic change, but then add in that I'm married, living in an entirely new city and have a daughter. It adds up and it gives you a lot to reflect on and write about.

Did being in Nashville get you out of the whole paparazzi scene?

I fortunately have been able to avoid being that person. I think that whole culture of being obsessed with celebrity happened fortunately after my second record ... I wasn't the girl who wore no panties and went out drinking every night, so I avoided that, thankfully. And then I moved to Nashville and that was intentional on some level. Just having had Owen, I didn't really want to raise her here in L.A. That was a big reason for moving; I just wanted to have a quiet little existence where you could go to the market without worrying about who you were gonna run into. But now in Nashville you do go to the market and run into people you know, but it's not people with cameras. Yesterday we were leaving lunch somewhere and there's this one lone paparazzi guy standing out there, "Hey, Michelle, I'm gonna take your picture." And I was just like, "God, this is one guy and one lunch out of the week and it's irritating." I couldn't imagine. I actually have a lot of empathy for people who have to deal with that. I think I'd lose my sh--.

What does it mean to have people like Dwight Yoakam and the Eagles working with you?

I've been really fortunate that I've been able to ... tour or record or even collaborate in whatever form, with a lot of people that I really respect and admire. When I got asked to do that show with the Eagles, the next night they asked me to open up for them for a stadium show in Salt Lake City. It was just me and an acoustic guitar in front of a stadium of Eagles fans who didn't want to hear anybody but the Eagles. That was pretty nerve-wracking. I remember hearing 'Peaceful Easy Feeling' or something and being in the car with my dad. Those are really strong musical memories for me. So when one of them strolls on stage and goes, "Hey, what's that song? I like what you're doing," you're just like, "What? How did this happen?" Dwight is another instance where my dad always had Dwight on. I just think he's one of the last, in country music for sure, great stars. When he walks in the room it's like you don't even have to be looking at the door - the air shifts, everyone stops, and you know someone amazing just walked in the room and you turn. I just feel like he has such artistic integrity and he's always only done what he really truly believes in -- and he kicks ass.

How did working with him come about?

I was recording. I heard he was in the building and I was just beside myself, "I have to meet him." I wasn't even thinking about him singing on my record. I went in and pretended to be making tea, "Oh, Dwight, is that you? I'm Michelle Branch." At first he had no idea who I was and his manager goes, "You know her, she's in the Wreckers, you like the Wreckers." He goes, "Oh yeah, sorry, nice to meet you. What are you doing?" I said, "Working on a record," and just blurted out, "It'd be great if you wanted to sing harmony on it or something." And he politely said, "Send it to my manager and I'll think about it." Never thought I would hear anything. So I go back in the studio and I'm like, "Which song should I send him?" We were recording 'Long Goodbye' and it seemed like the obvious song to have him on. I sent it to his manager ... and one night I get this call, "Hey, Michelle, it's Dwight. I really, really like the song, but..." And I'm like, "OK, the 'but' is that he can't do it." "But, I wanna take a verse. I think this would be a good duet." I almost fell out of my chair, that's how that started. But that's the cool thing about music is that you can constantly inspire each other and the fact that we do get to work together. There's no ego involved and you can have that exchange. It's really encouraging to see that people at that level can still collaborate in that way. It doesn't happen that often, but that's probably one of the best perks about what I do. And free concert tickets. [laughs]

What was the last concert you saw?

Fleetwood Mac ... that was the last show I saw and it was in Nashville. I was there with Sheryl Crow, and I'm so depressed that I missed this. I had my daughter there with me, she was kind of getting antsy and fig
hting off sleep, so Teddy, my husband, and I took her in the back to find a spot for her backstage, I left him and her backstage to come back out, I walk out in the middle of 'Landslide,' and Sheryl's face is just like, "I can't f---ing believe it. Stevie [Nicks] just dedicated the song to you and me, and you weren't here to hear it." I was like, "Are you joking? I'm at a Fleetwood Mac concert, 'Landslide,' was dedicated to me and I'm the jerk who's not around to hear it!" But the one funny thing about that show is women who are huge Stevie fans bring tambourines to the show, which initially you're [thinking], "Oh, that's cute." Then an hour into it you're like, "This is not cute," because they all play tambourine off-time.

You went from pop land to Nashville six years ago and now a lot of people are doing it, from the Eagles to Def Leppard. Do you feel like a bit of a trendsetter?

I do. And it's so funny now that there are so many people who are kind of going that way. I'm actually really happy that I got the chance to do it by myself and it wasn't like a trend. I think it was a lot more believable to everybody and they could see how genuinely we wanted to be there in the format and make that music, and how much we felt at home there. Everyone always says that I get on a trend first, but then I never get credit for it. Not that I'm looking for it, I'm just laughing out loud about it because everyone is always saying, "You started with that whole group of girls, Avril [Lavigne] and everyone." And I'm like, "Yeah, they all end up being far more popular than me." So it's kind of funny how I'm easily forgettable. [laughs]

But now I'm giving you credit for it. "Michelle Branch moves to Nashville and Def Leppard, the Eagles, and ZZ Top all follow."

The Eagles sound more country than most stuff on country radio, so that just makes me laugh. Some people can get their panties in a bunch about all these people coming into Nashville, but the way I look at it -- and maybe it's just me and my little naive world -- it's opening the door for people who thought they maybe knew what Nashville was and what that scene was and maybe didn't really understand it or give it the time of day. I say, the more the merrier, because at the end of the day if it's good, it's gonna stick, and if it's bad, it's gonna be gone in two seconds. And it's really a cool thing to hear a younger person come up and say, "I never listened to country music until the Wreckers, and then I started listening to so and so." To open someone's mind and have them be a little bit more tolerant and experiment with what they think is their taste is a pretty cool thing. Some people get territorial. I don't think there's a reason to at all.