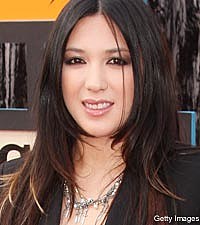 Michelle Branch left a note on her official message board Tuesday, giving fans an update on what she's been up to.

"This morning I finished mixing the last track for the album," she writes of her upcoming solo CD. "I can't believe I'm finally officially finished. It's been well worth the wait. (At least I think so.)"

Michelle goes onto report that the album's first single, 'Sooner or Later,' will premiere on her website on July 20. But now that the former pop star, who crossed over to country with The Wreckers, is back on her own again, will we hear the song on pop or country radio?

The answer is country radio, if Michelle has anything to say about it. When The Boot caught up with Michelle at the CMT Awards last month, she told us that the new album is pretty similar to The Wreckers' music and is "definitely country" -- with guest vocals by a country icon.

"Dwight Yoakam sings a duet with me, which is just amazing," Michelle told The Boot. "It was just incredible to work with him."

So is Michelle settled in country music for good?

"I don't know if I can make that decision. I mean, what if I want to make a rap album someday?" she answered us with a laugh. "But I feel so much more comfortable here, and I wish I'd come here sooner, but I'm a big believer in everything happens for a reason."

Michelle's former Wreckers partner, Jessica Harp, has also branched out with a solo country project. Its first single, 'Boy Like Me,' is already climbing the country charts, with the full album expected later this summer.