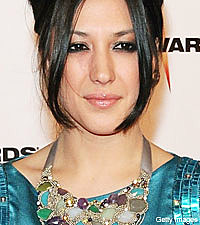 The release date of Michelle Branch's new album, 'Everything Comes and Goes,' is still pending, and she's not happy about it.

"I'm so anxious," Michelle told The Boot on the CMA red carpet last month. "I've never had an album in my possession this long. My first two records I did in like 35 to 40 days. Anxious isn't even the right word. I don't know how I can elaborate on that any more."

In fact, as of late, the singer-songwriter -- who, after leaving the Wreckers, is waiting on her record label to put out her first country solo effort -- has been getting publicly fed up.

"I wonder if I died in a car accident or checked myself into rehab if WB would finally release my record," Michelle mused on Twitter, adding, "What? Oops, not my inside voice."

When her followers responded, Michelle came up with a new publicity plan: "Okay. Sounds like you all want me to live (so do I, believe me), and rehab sounds boring, so I'm admitting it now: I SLEPT WITH TIGER WOODS!!!"

Jokes aside, Michelle has been performing her latest single, 'Sooner or Later', and more new songs at one-off shows. And, of course, she's been keeping in touch with fans on Twitter. The album is now supposed to come out in 2010, but no date has been set.

"I'm really proud of this music," Michelle tells The Boot. "I worked my butt off on this record, and I feel like it's my 'coming out' record ... It's been six years since I've had a solo record out, and this one's in a different genre. Hopefully the fans will like it."