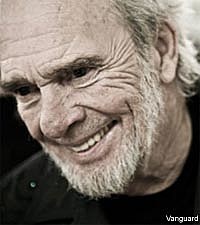 Merle Haggard is, no doubt, a living legend in today's music world. When he sings of spending time in prison, he speaks from experience. When he writes lyrics about going in the wrong direction despite his mother's attempt to steer him right, he's writing a non-fictional chapter from his life.

PBS has captured these and more stories about the singer in 'Merle Haggard: Learning to Live with Myself, American Masters,' which premiers July 21 on NPT and PBS stations nationwide. The documentary traces Merle's life story from his delinquent ways as a teenager to time spent in San Quentin Prison, and on through his success as one of country music's most respected singer/songwriters and entertainers. There are some great clips of a young Merle before music became his life, as well as footage of him singing some of his best-known songs, including 'Okie From Muskogee' and 'Workin' Man Blues.'

The story of Merle seeing Johnny Cash perform at San Quentin on New Year's Day, 1959, is a well-known one. To this day, Merle says seeing Cash "changed my life forever." The man who was a prisoner became a man with a purpose, that of becoming an entertainer who spoke out for the common people, like the Man in Black.

Now 73, Merle has just fought another major battle in his life. He is a cancer survivor, having had a tumor removed from his lung at the end of 2008. By spring of 2009, he was back performing, saying at the time that he thought it would be one of his busiest years to date. Merle has not let up since then, releasing a new album, 'I Am What I Am,' earlier this year.

Never afraid to be outspoken about topics from music to politics and religion, the singer and songwriter strives to keep his music honest in an industry that likes to tout its latest youngster as the new hip thing. It's not an easy time to get his music played on radio, yet the new album debuted at No. 18 on Billboard's country album chart and No. 76 on the magazine's Top 200 album chart.

Haggard will never turn his back on the music he loves. He is emphatic when he states, "I would've become a lifetime criminal if music hadn't saved my ass."

Gandulf Hennig, the filmmaker who produced 'Fallen Angel: Gram Parsons,' is the main force behind the film. He and a crew followed Merle for three years, documenting footage while he was at home on his ranch and while he hit the road taking his music to the fans.

"As a documentary filmmaker, it has been a dream come true and, at times, a challenge," says Hennig. "Merle is very guarded, at the same time, very honest. As an artist, he is as original and as spontaneous as it gets. Working with Merle, I learned to prepare for the unexpected at all times -- it seems that he often doesn't know himself what he's going to do next. There is no middle ground with him. It's not always easy, but it's always exciting. "

Henning not only talked to Merle, he rounded up a few of his buddies and peers, among them Kris Kristofferson, Tanya Tucker, Dwight Yoakam, John Fogerty, Billy Gibbons of ZZ Top, Keith Richards of the Rolling Stones, producer Don Was and actor Robert Duvall. These men and women give insight into the man they have come to know over the years, as they've traveled the road with him, admired the man and his music, and become his friend.

"There are a lot of us that they called outlaws back in the beginning, but Merle was a real outlaw," Kris says of his friend in the documentary.

To see a preview of the television special, go to the PBS website.