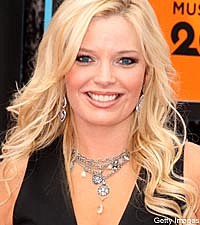 Melissa Peterman, best known for her role as the wacky Barbra Jean on the hit show 'Reba,' is putting her act on the record. The funny lady is releasing her debut comedy album this spring on Big Machine Records, home to Taylor Swift as well as sister label to pal Reba McEntire's Valory Music Co.

"I have always wanted to be a recording artist mostly because I really want a tour bus ... I hear those things are a party on wheels," jokes Melissa. "The truth is I love what I do and to get a chance to share my stand-up with fans who haven't had the opportunity to see me live is very cool. And the great part of having your own comedy CD is I am already done Christmas shopping."

With her Christmas shopping out of the way, Melissa has kept busy with several other projects. She's currently on tour with George Strait, Reba and Lee Ann Womack, as well as hosting CMT's 'The Singing Bee.'

A few weeks ago, Melissa also went before the cameras again to tape her first comedy special, 'Am I the Only One,' scheduled to air Friday, March 12 on CMT.