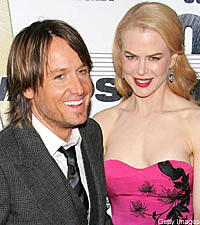 "There was a lady named Sunday Reed who was a prominent patron of the arts in Victoria," Kidman told The Daily Telegraph. "I have read a bit about Sunday Reed and her husband John -- she was a key mover and shaker in the arts around the beginning of the century. The name Sunday struck me as being a nice name for a woman, so my wife and I mentioned it."

Sunday Reed was not only famous for her patronage of the arts, but also for her controversial personal life. She and her husband both reportedly had romantic affairs with Nolan, which resulted in Reed becoming Nolan's muse. Reed committed suicide in 1981 at age 76.

So how does this all relate to the superstar parents? Well, Kidman and Urban visited a Sidney Nolan art exhibit in Sydney, just before announcing Kidman's pregnancy. The couple were said to be taken with a famous quote by Nolan, which hung in the exhibit and reads: "When you are young you are given a good view of life, because of your closeness to birth."

The baby's middle name, Rose, is a family name. Urban's brother Shane told an Australian radio station that the baby's second name is a tribute to their late grandmother, Rose.

Sunday Rose Kidman Urban was born Monday in a Nashville hospital. She weighed 6 lbs, 7 ounces and is said to be happy and healthy.

In a world exclusive, PEOPLE magazine has the first photos of the 1-month old twin babies of JENNIFER LOPEZ and MARC ANTHONY. In the accompanying cover story, Lopez dishes on her pregnancy. (Photo by People Magazine)

NATALIE MAINES and her son Slade arrived at the World Premiere of 'Pirate Of The Caribbean: At World's End' at Disneyland in Anaheim, California May 19, 2007. (Photo by X17online)

Scary Spice MELANIE BROWN with her daughters Pheonix and Angel before leaving London's Heathrow Airport for the next leg of the Spice Girl tour. (Photo by CAMERA PRESS / David Dyson)