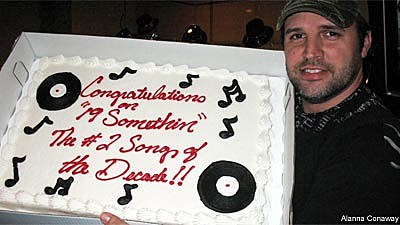 Mark Wills' friends and fans threw him a special on New Year's Day, prior to his show in Pocola, Okla., celebrating his hit '19 Somethin'' being named Billboard's No. 2 Country Song of the Decade. Mark was given a special cake congratulating the achievement, as well as a No. 2 plaque similar to those given at No.1 parties. A humbled Mark then took the stage for his first show of 2010 with tourmates Jeff Bates and Trent Willmon, as part of the Honky Tonk Tailgate Party.