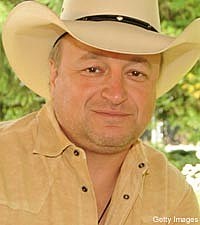 Mark Chesnutt was hard at work being a rock 'n' roller until he heard Waylon Jennings and Willie Nelson. Now the Texas-born singer is paying tribute to the two men, as well as others at the forefront of the outlaw movement, in his new album simply titled 'Outlaw.'

"This is the kind of music I grew up on, so it didn't take me long to say yes when I was approached about doing an album of songs from the outlaw period in country music," Mark tells The Boot. "I looked at it as an opportunity for me to pay tribute to some of my heroes."

The 12-song disc includes tunes not only sung by some of the biggest outlaws in the genre, but by songwriters who were also considered an integral part of the era. From Hank Williams, Jr.'s 'Whiskey Bent and Hell Bound,' to the classics 'Sunday Mornin' Comin' Down' and 'Lovin' Her Was Easier (Than Anything I'll Ever Do Again)' penned by Kris Kristofferson, Mark chose a great cross-section of songs.

"One of the first I picked to go on the album was 'Black Rose,' which may not be so well known, but is one of my favorites," Mark says of the Billy Joe Shaver tune. He also covers several of Waylon's popular hits, perhaps being a little partial because the fellow Texan is one of his favorite performers. In fact, Mark's son is named after Waylon.

"The outlaw movement came out of Texas," he happily points out, noting that Willie had already moved back to Austin and convinced Waylon to come down and check things out when the term 'outlaw' began being used to describe the music they were making. It was music that was honest, brutally sometimes. Music that rang true when they sang it, not something contrived in a studio in Nashville or in the writing room of a publishing company on Nashville's Music Row. Additionally, the artists took control of the music they recorded, deciding for themselves who would be on the session. Sometimes they brought in their road band to record; other times they brought in their favorite studio musicians. Aside from the calibre of music being made, this total artist control became the signature of the movement.

One of his favorite songs on the CD is Kristofferson's 'Lovin' Her Was Easier,' which is scheduled to be the first single. Mark says he had never considered the song to be something he would do, but when he went in to record it for the album he was pleased with the way it turned out. "I tried to put my own twist on most of the songs, but on this one I tried to stay pretty true to what Waylon did with it. There was definitely some spirit going on the day I recorded that song, let me tell you. I'm pretty proud of the way the song sounds."

Mark's other Waylon selections are 'Only Daddy That'll Walk the Line' and 'Are You Ready for the Country?' He also recorded 'A Couple More Years' as a duet with Texas singer Amber Digby. Written by Dennis Locorriere (of Dr. Hook fame) and Shel Silverstein, the song makes for a great collaboration between the two.

"Amber is a Texas singer, and on this song she sings in unison, rather than harmony," Mark explains. "I think it makes the song feel more real."

Produced by Pete Anderson, known for his work with Dwight Yoakam, Sara Evans and Roy Orbison, the record was made in what Mark calls 'the old-fashioned way,' with the musicians coming in during the day to lay down their part, and him showing up at night to sing. Pete says that Mark did the entire album in less than three hours. Noting that he and the rest of the engineering crew were absolutely amazed at what he did and how great it sounded when he was finished.