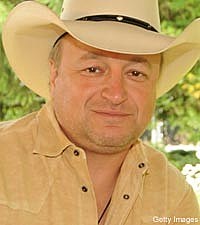 "I cut my teeth on this kind of music," says Mark (quote via GAC). "It's an opportunity [that might not have otherwise presented itself] for me to pay tribute to some of my biggest heroes in country music."

Indeed, when Mark's first son was born, he named him Waylon -- in loving tribute to his rough-and-tumble hero. Waylon, of course -- along with Willie, Jessi Colter and Tompall Glaser -- sparked the outlaw era of the 1970s with their compilation album, 'Wanted: The Outlaws.'

A Texas teen at the time, Mark was heavily influenced by his outlaw heroes -- who refused to bend their sound to satisfy Music Row decision makers. He was also influenced by the traditional sound of George Jones and the multi-genre sound of Elvis Presley. Those influences are so deeply rooted in Mark as a singer, that he was able to lay down vocals in the studio in less than three hours on this project, whereas most singers will typically labor for days or even weeks, trying to perfect their vocals.

"Mark put on a vocal display like I've never before seen in the studio," says veteran producer Pete Anderson, best known for his work with Dwight Yoakam. "We are all amazed at the results. There may be singers out there as good as Mark, but there are none better. And at this point in my career, I am thrilled to have had the opportunity to work with this caliber of talent."