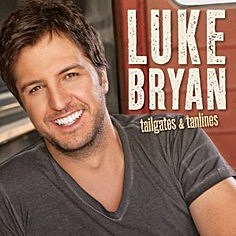 "With this album, I think we really found the right songs," shares country superstar Luke Bryan, whose third studio album, 'Tailgates & Tanlines,' is out today. "We were really smart with how we chose them."

The 13-song collection, Luke's follow up to his gold-certified sophomore album 'Doin' My Thing,' marks a significant stride forward artistically and vocally from his previous two albums, claims the Georgia native. "My voice on 'I'll Stay Me' is not even the same voice, not even the same animal," Luke tells The Boot. "I don't even approach singing that way anymore. I've learned so many more things about being an artist, and being who I am. The moment you start really figuring out where you want to go with who you are, and what you're about, is where your artistry really begins."

With his matured voice came a deeper appreciation for songs he didn't help write. Although Luke co-penned eight of the 13 tracks, the singer tackles five outside songs, which is more than his first two albums combined.

"Up until this album, I would have a tough time singing outside songs. For some reason, I couldn't get connected with them," Luke confesses. "A lot of the time, we didn't put outside songs on the record for that very reason. I didn't make them believable."

When talking about the writers who contributed to the project, Luke teases, "I'd like to think they read my mail. When you look at songs like 'Drunk On You,' 'I Knew You That Way' and 'Tailgate Blues,' they sound like me ... I can call and chew the songwriters out for not including me in that songwriting session!"

One song that Luke did co-write is current Top 10 hit, 'Country Girl (Shake It for Me),' the project's first single and his fastest-rising radio single to date. The singer admits to taking the tune exactly for what it is. "It's not going to be song of the year. It's not going to change the world," he says. "But people aren't going to get tired of hearing it. It's ear candy to me. It's my little version of a rap song."

'Tailgates & Tanlines' is available in stores and at all digital outlets today (August 9). Fans can click here to keep track of Luke's concert schedule, which includes a headlining tour that kicks off next month.