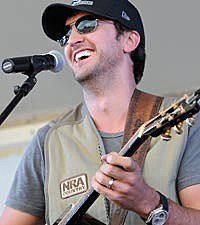 A decade after a wide-eyed Luke Bryan moved to Nashville to pursue a recording career, the Georgia Native is set to partner with CMT for his first headlining concert series, CMT on Tour: Luke Bryan Tailgates & Tanlines.

"If you move to town and you don't dream to headline your own shows one day, then I don't think you're necessarily aiming your sights high enough," Luke tells the Associated Press. "That's kind of where we're at today, and we're just wanting to get out there and enjoy headlining."

After touring with some of country music's biggest acts including Jason Aldean, Rascal Flatts and Kenny Chesney, the former ACM Top New Artist feels as though he's taken adequate notes from the veteran entertainers to venture out on his own.

"You learn it's tough work doing what we do. You don't just snap your fingers and everything lines up easily for you," he confesses. "I've watched them. I've watched all the work they put into their tours. You never take your fans for granted. You always appreciate them every show, night in, night out."

Luke is the latest country entertainer to be chosen by CMT to headline the unique fan experience. Prior headlining artists include Keith Urban, Sugarland and Miranda Lambert. Brad Paisley anchored the inaugural concert series in 2002. Luke has buddies Lee Brice and Josh Thompson as his opening acts.

Until CMT on Tour: Luke Bryan Tailgates & Tanline kicks off in September, Luke and the Band Perrywill continue to provide opening entertainment on Tim McGraw's Emotional Traffic tour through mid-August. The 'Country Girl (Shake It for Me)' singer will release his upcoming project, 'Tailgates & Tanlines,' on August 9.