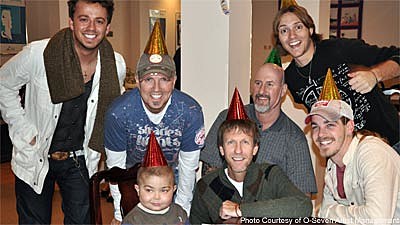 Christmas came a little early for several children in Nashville, Tenn., thanks to the contributions of Bucky Covington, Love and Theft and Sawyer Brown. The artists banded together at Vanderbilt Children's Hospital and the nearby Ronald McDonald House, to play Christmas songs as well as several of their own hits, all while spending time visiting with the children and their families.

"Seeing all of the children's faces light up was an early Christmas gift for me," Bucky says. "All of these children are going through trying times and have long days. I'm incredibly thankful for the opportunity to give them a nice break in the day and bring a little holiday cheer."

In addition to playing music, the artists also created a special birthday meal for each of the children living at the Ronald McDonald House while undergoing cancer treatment at Vanderbilt. The lunch included a build-your-own taco bar and brownies. Each artist wore party hats, played balloon toss and led the children and their families in singing 'Happy Birthday.'

Love and Theft were recently announced as an opening act for several of Tim McGraw's upcoming Southern Voice tour dates. Meanwhile, Bucky is back in the studio, working on the follow-up to his self-titled debut album.