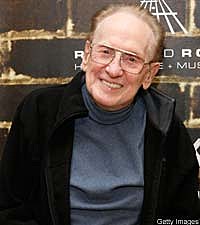 A star-studded tribute to Les Paul, the innovative musician widely regarded as the "father of the electric guitar," will take place Thursday, Nov. 19, at Nashville's Ryman Auditorium in Nashville.

Among those expected to perform at the event are Paul's godson, Steve Miller of the Steve Miller Band, Charlie Daniels, John Rich, Steve Wariner, J.D. Souther, Emerson Drive, Joan Jett, Ace Frehley of KISS, and Josh Kelley, with others expected to be announced soon. The show is free but tickets are required and seating is limited. Details are available at Gibson Guitar's Les Paul Tribute page.

Les' son Rusty says the Ryman Auditorium is the perfect place for the tribute, as the Ryman was always held special meaning for his dad. "It is the place that helped form the early years of my father's love of music and subsequently drove his passion for his many inventions," Rusty notes. "I am so thrilled to be back here for this very special tribute and know that Dad is smiling from above."

Several other programs and special events will continue throughout the year and early 2010 to mark anniversary dates significant to Les Paul's life. The legendary musician passed away in August at age 94.