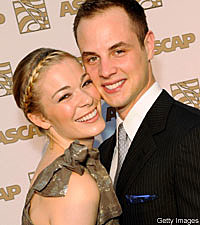 LeAnn Rimes will soon lock lips with someone other than her husband! But don't worry, it's all an act. The singer is set to star in a steamy Lifetime television movie, based on the Norah Roberts novel, 'Northern Lights.' Rimes will play the character of Meg Galloway, a pilot who is plagued by family and romantic troubles.

There's no word yet on the actor who will portray this new guy, but Rimes reports there will be a love scene between the two.

"I definitely will be making out with someone," she says. "I think I know who but I can't say yet."

So what does hubby Dean Sheremet think of his wife kissing someone else? He's nothing but supportive.

"I said, 'If you look awkward, it's gonna look even worse,'" Sheremet says. "I said, 'You better go for it.' It doesn't bother me. I'm a very confident person!"

The movie begins filming in November in Calgary, Canada.