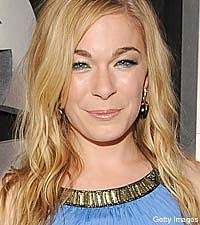 LeAnn Rimes is just one of the many artists who lost most, if not all, of their music equipment during the floods that hit Middle Tennessee last weekend. LeAnn, Brad Paisley, Keith Urban, Toby Keith and nearly 600 other musicians had stage sets, instruments and music production items stored at Nashville's SoundCheck rehearsal and storage space, which was hit hard by the deadly floods.

LeAnn's band and crew went by SoundCheck on Saturday to survey the damage. "We are finding out that we have lost everything," LeAnn, who is on vacation in Bora Bora, posted on her Twitter page. "I'm so sad! Not for me, but for my band who have lost precious instruments that cannot be replaced. Thank God we have our lives and a roof over our heads. My heart breaks for the people who have lost everything.

"I am being told it's a very grim situation," LeAnn added. "It's smelly and there are snakes everywhere."

Chuck Wicks also had his stuff stored at SoundCheck. "Due to the flood, we are playing tonight's show on 'borrowed' gear -- guitars ... amps, etc.," he posted on his Twitter prior to his show in St. Paul, Minn., on Saturday.

Jo Dee Messina is heading over to SoundCheck on Monday to see what can be salvaged from the storm.

David Nail, who was in Las Vegas when the massive storm hit Tennessee, was able to get home to Nashville only to find out his house flooded. It's been nearly a week since he's been back in town, but he has not been able to return to his home.

In the meantime, Kellie Pickler, along with Contemporary Christian artist Ce Ce Winans and Americana performer Will Hoge, have been added to the list of performers for GAC's upcoming benefit, 'Music City Keep on Playin': A Benefit for Flood Relief.' They join previously announced performers Brad Paisley, Dierks Bentley, Lady Antebellum and Rodney Atkins. Tickets go on sale Monday, May 10 at Opry.com for the live concert telethon taking place Sunday, May 16 at 8:00 PM ET at Nashville's legendary Ryman Auditorium. All funds raised will go to the Community Foundation of Middle Tennessee.