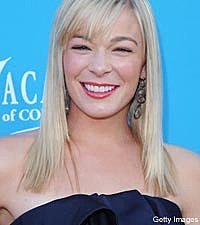 LeAnn Rimes has been hard at work in the studio putting the finishing touches on her forthcoming album, 'Lady and Gentleman.' Produced by Vince Gill, the album is filled with all of LeAnn's favorite classic love tunes from over the years.

"We came up with this idea of doing a covers record of all my favorite love songs," LeAnn tells GAC. "When I started digging into those, they were all by men so I decided to cover all my favorite love songs that were originally covered by men. There's everything from 'He Stopped Loving Her Today' [George Jones] to 'Good Hearted Woman' [Waylon Jennings] to something fun like 'Swingin'' [John Anderson]. ['Swingin''] was my favorite song [growing up]. It came out when I was like 18 months old or two years old. I used to be dead asleep in the car, and when it would come on, I would wake up and start singing it. So I had to put that on the album! We had so much fun."

One thing LeAnn point outs is that if you think you're getting a record of the classics to hear them the way they were originally recorded, think again! "Some of the songs are ballads [that we cut], and we turned them into uptempo songs. It's not just a covers record where I'm covering the songs from front to back where it sounds exactly the same."

LeAnn is currently gearing up to hit the road in June, playing select dates this summer.