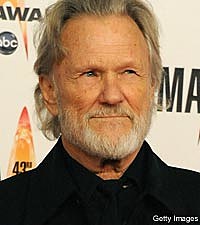 Kris Kristofferson says he had to leave the room the first time he heard a recording of his song 'Sunday Morning Coming Down.' Not Johnny Cash's version, but actually Ray Stevens' -- who was the first person to record Kris' mournful story of a man pulling on his "cleanest dirty shirt" and heading out to greet Sunday and a few memories and regrets along the way.

"At the time Ray cut it, nobody had ever put that much money and effort into one of my songs," Kristofferson tells The Boot. "He's a wonderful singer. The first time I heard it, I had to leave the publishing house. I went out and sat on the steps and wept. Of course, the record company didn't want him to put it out and go in that direction, because he was having success with those novelty songs at the time he cut it. Then John did it, and he had the hit with it.

"Up until like 1969 ... until the time that John had that TV show ('The Johnny Cash Show'), I didn't have any real success you could point at with my songs," Kristofferson continues. "After he recorded 'Sunday Morning Coming Down,' it was like a flood gate opened. All of a sudden I'm recording and doing films, and everybody is doing my songs."

The legendary entertainer says all the positive reinforcement solidified one of the biggest decisions of his life: "If it did anything, it convinced me I was right when I followed my heart here (to Nashville). People thought I was crazy," he recalls. "Then there were people like Mel Tillis and Harlan Howard, people I respected, who encouraged me before I had a hit record. That helped me stay around until things started to happen for me."

Cash's version of 'Sunday Morning Coming Down' hit No. 1 on the charts and was the 1970 CMA Song of the Year winner.