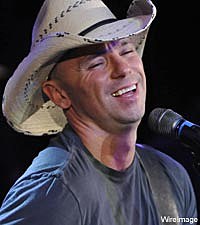 From his own Black & Gold draped suite in Sun Life Stadium, Kenny Chesney cheered his New Orleans Saints on to a wild 31-17 Super Bowl victory on Sunday. Afterward, with his father and college buddies in tow, he attended Coach (and friend) Sean Payton's post-game locker-room speech. And after that -- at Coach Payton's request -- Kenny hit the stage at Miami's Intercontinental Hotel to rock the Super Bowl champion New Orleans Saints' victory bash along with hundreds of jubilant players, their families and guests.

Sporting a white T-shit and Saints cap, Kenny pulled Coach Payton onstage with the coveted Vince Lombardi Trophy, shouting "The Saints just won the Super Bowl!" and then lit into 'Living in Fast Forward.' When the elated coach announced that he intended to drink beer in Mexico, Kenny kicked into a raucous performance of 'Beer in Mexico.'

As Kenny sang into the wee hours of the morning, his exuberant audience took up the chant, 'Tro-phy! Tro-phy!' until Coach Payton handed the prized hardware into outstretched hands ... and in the next moment the Vince Lombardi Trophy was crowd-surfing. Thirty minutes later, Kenny ended his set, embraced Coach Payton and left.

The victory bash over, it's back to work now for Kenny, as he heads for Nashville to put the finishing touches on his concert film, 'Kenny Chesney: Summer in 3-D.' The film opens in theaters nationwide in April. The end theme from the movie, 'Ain't Been Back,' hits radio later this month.