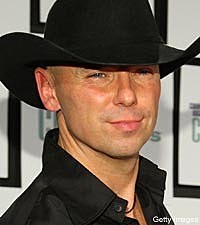 Kenny Chesney's concerts have been among the hottest tickets of the decade, and he's set a record by playing before more than a million fans every year for the past five years. But Kenny reveals that next year that record will likely go to someone else. The four-time CMA Entertainer of the Year, who's up for that honor again this year, has announced he's taking an indefinite break, with no immediate plans of returning to the stage. But don't fire up the candles on the retirement cake just yet!

"I'm not quitting! I'm not quitting. It's just a short pause," Kenny tells Entertainment Weekly. "It would be easy to keep doing it, because it's fun, and the fans are unbelievable. But I don't know - then you realize that at some point you're missing a part of your life."

In spite of his huge success, Kenny says there are more important things than ticket sales and sold-out shows. "My life has been a lot about parking lots. I need to recharge creatively, and get off the clock of having to be somewhere just because, and having to keep juggling all these things...I just felt like this year it finally hit me that I need to get reconnected with my family. I wanna do some things that I've never gotten to do, like see other parts of the world, write some more songs. Do some shows that are completely different for me...Something to feed my soul. I've given a big part of my soul for this for so long, and nothing has really been filling that up. It seems like in the last couple of years, I've been on an empty tank. And that's gotta change."

While the breakneck pace of the past several years may taken a toll, Kenny says he has no regrets, and reiterates that this doesn't mean he''s going away permanently. " I think I'm really blessed to have a run like we've had. I don't take it for granted. You realize what it means for the fans to be there, too. I don't take that lightly. As a performer you don't want to let go of that connection, but you also know as an artist you want to give them even more. And I realized this year that means just taking a deep breath, because I want to give them more later on, too."

Kenny says he's been considering taking a break for some time, but it was wise words from one of his musical heroes that finally encouraged him to do so. "One night when we were playing in New Jersey, Bruce [Springsteen] sat on my bus with me and we talked for a couple hours. He told me something that hit me really hard, and it's stuck with me ever since. He said, 'Kenny, you can write half a song on a piece of paper, and you can put that piece of paper away in a drawer for five years, and you can go back to it, and that song will still be there. But life isn't like that. And whatever you're doing, don't miss your life, too.'"